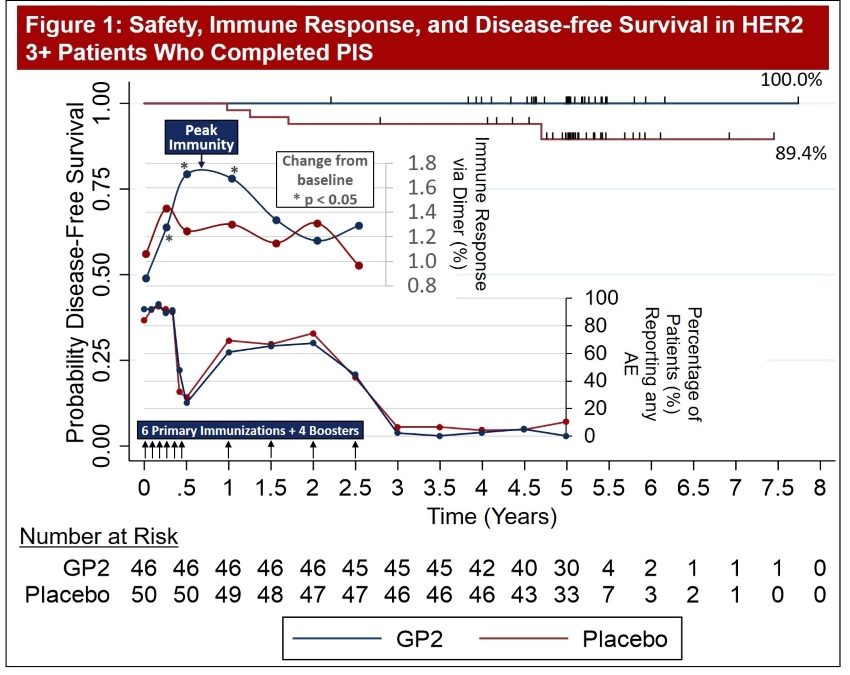 The abstract can be viewed at the bottom of this press release, and the full poster, Figures 1-2, Tables 1-2, and an audio track of the poster by VP of Clinical & Regulatory Affairs Jaye Thompson can be accessed and downloaded at: https://greenwichlifesciences.com/clinical-trials/.

It has been previously reported that the completion of the GP2 immunotherapy (GP2+GM-CSF) Primary Immunization Series (PIS) reduced recurrence rates to 0% over a 5 year follow-up period in HER2 3+ patients who had received a standard course of trastuzumab after surgery. The abstract and poster present the final safety data over the 5 year follow-up period, assessing the safety of GP2 immunotherapy and its relationship to previously presented peak immunity and recurrence rate data.

Snehal Patel, CEO of Greenwich LifeSciences, commented, “The final 5 year analysis of the safety data in the Phase IIb trial is now complete and represents an important milestone for the Company. With the recurrence rate or disease free survival (SABCS 2020), immune response (AACR 2021), and now safety data (ASCO 2021), the final design of the planned Phase III trial can be completed. This final combined data set encourages us to utilize the same treatment strategy in the planned Phase III trial to conservatively reproduce these promising results that showed that GP2 immunotherapy may prevent metastatic breast cancer recurrence. In addition, this final data set can now be presented to investors and strategic parties interested in partnering with the Company to co-develop and license GP2.”

Excerpts from the ASCO Poster 542:

Safety data was analyzed to assess injection site reactions and systemic adverse events (AEs) of each treatment arm. Most patients completed the planned PIS: 81 (91.0%) GP2+GM-CSF and 86 (94.5%) GM-CSF only. In addition, 77 GP2+GM-CSF and 80 GM-CSF only patients received all 4 booster injections. The most common injection site reactions were erythema, induration and pruritis, and they occurred with similar frequency in the two treatment arms. Injection site reactions were reported by almost all patients over the course of vaccinations. Occurring in a smaller percentage of patients, the most common systemic adverse events were fatigue, headache, and myalgia/arthralgia, again with similar incidence by treatment arm. The majority of all events reported were of grade 1, mild severity. Five GP2+GM-CSF patients reported 6 events considered definitely, possibly or probably related to study medication, which were grade 3 or 4: induration (2), urticaria, rash, pruritis, and arthralgia. Urticaria, allergic reaction and hypersensitivity reaction were considered possibly related events of grade 3 or 4 in GM-CSF only patients. No serious adverse events considered related to study medication were reported over the full 5 year treatment and follow-up periods. 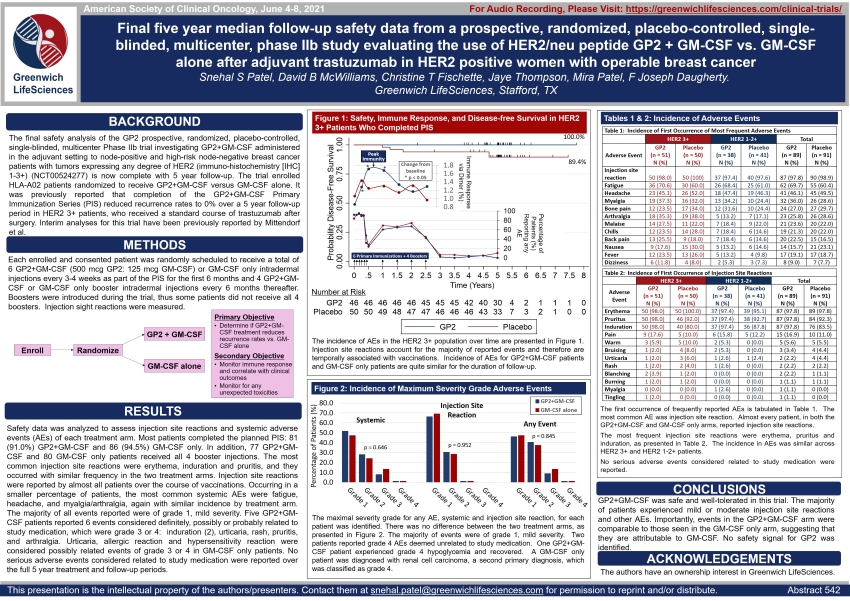 Figure 2 of the poster shows the maximal severity grade for any adverse event, systemic and injection site reaction, for each patient. There was no difference between the two treatment arms. The majority of events were of grade 1, mild severity. Two patients reported grade 4 adverse events deemed unrelated to GP2 immunotherapy. One GP2+GM-CSF patient experienced grade 4 hypoglycemia and recovered. A GM-CSF only patient was diagnosed with renal cell carcinoma, a second primary diagnosis, which was classified as grade 4. 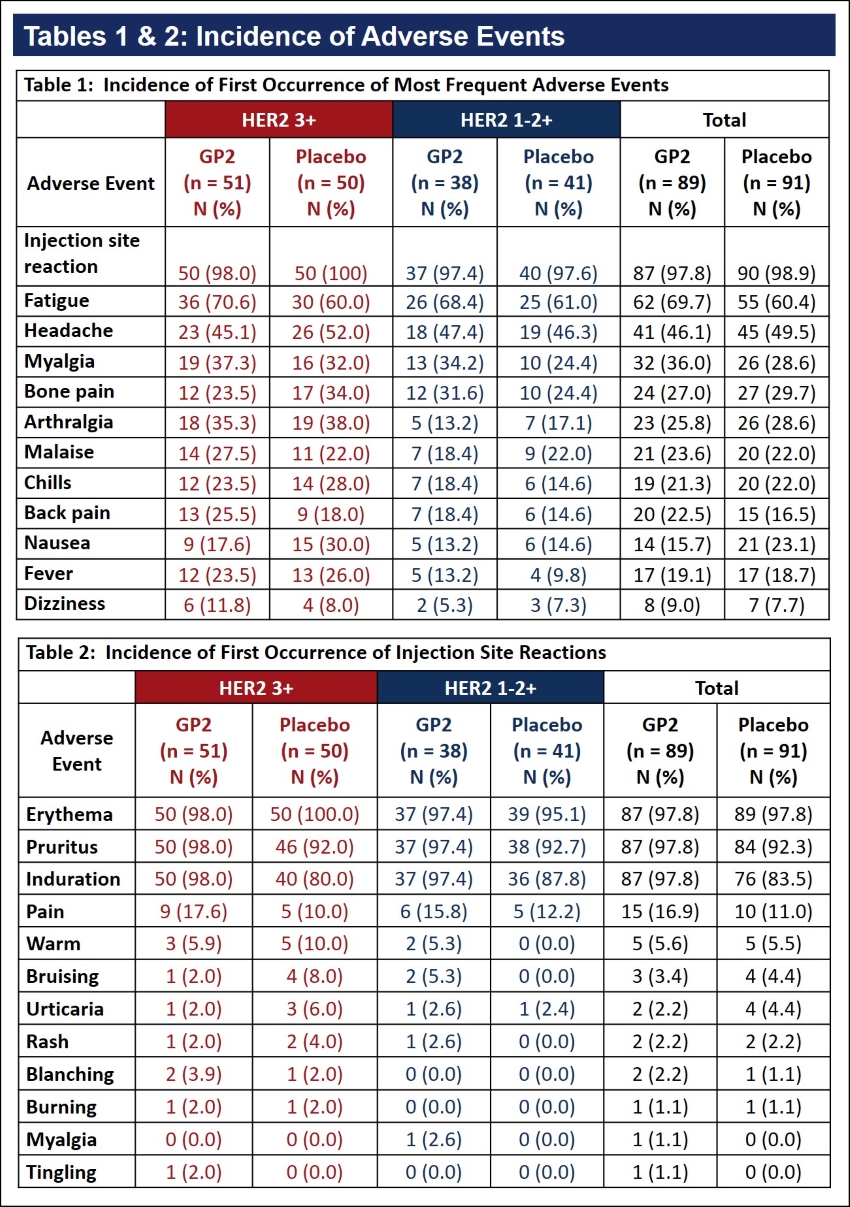 Background: The final analysis of the GP2 prospective, randomized, placebo-controlled, single-blinded, multicenter Phase IIb trial investigating GP2+GM-CSF administered in the adjuvant setting to node-positive and high-risk node-negative breast cancer patients with tumors expressing any degree of HER2 (immuno-histochemistry [IHC] 1-3+) (NCT00524277) is now complete with 5 year follow-up. The trial enrolled HLA-A02 patients randomized to receive GP2+GM-CSF versus GM-CSF alone. It was previously reported that completion of the GP2+GM-CSF Primary Immunization Series (PIS) reduced recurrence rates to 0% over a 5 year follow-up period in HER2 3+ patients, who received a standard course of trastuzumab after surgery.

Methods: Each enrolled and consented patient was randomly scheduled to receive a total of 6 GP2+GM-CSF (500 mcg GP2: 125 mcg GM-CSF) or GM-CSF only intradermal injections every 3-4 weeks as part of the PIS for the first 6 months and 4 GP2+GM-CSF or GM-CSF only booster intradermal injections every 6 months thereafter. Boosters were introduced during the trial, thus some patients did not receive all 4 boosters. Injection sight reactions were measured.

Results: Safety data was analyzed to assess local and systemic toxicity of each treatment arm. Most subjects completed the planned PIS, 81 (91.0%) GP2+GM-CSF and 86 (94.5%) GM-CSF only. In addition, 77 GP2+GM-CSF and 80 GM-CSF only subjects received all 4 booster injections. The most common local toxicities were erythema, induration and pruritis and they occurred with similar frequency in the two treatment arms. Local reactions were reported by almost all subjects over the course of vaccinations. Occurring in a smaller percentage of subjects, the most common systemic toxicities were fatigue, headache, and myalgia/arthralgia, again with similar incidence by treatment group. The majority of all events reported were of Grade 1 mild severity (GP2+GM-CSF 92.5%, GM-CSF only 90.6%). Only 5 events in 4 subjects were considered Grade 3: induration and maculopapular rash/pruritis, in two GP2+GM-CSF subjects and chest pain and hypersensitivity reaction in two GM-CSF only subjects. The incidence of local reactions minimally increased with subsequent vaccinations; however, the types of events remain unchanged. No serious adverse events were reported over the full 5 year treatment and follow-up periods.

Conclusions: The study confirms the finding from the Phase I trial evaluating GP2+GM-CSF that the vaccine is safe and well-tolerated. The majority of patients experienced only mild local and systemic toxicities. Importantly, toxicities in the GP2+GM-CSF group were comparable to those seen in the GM-CSF only group, suggesting the toxicities are attributable to GM-CSF.

About the 2021 ASCO Annual Meeting

About Breast Cancer and HER2/neu Positivity

One in eight U.S. women will develop invasive breast cancer over her lifetime, with approximately 266,000 new breast cancer patients and 3.1 million breast cancer survivors in 2018. HER2/neu (human epidermal growth factor receptor 2) protein is a cell surface receptor protein that is expressed in a variety of common cancers, including in 75% of breast cancers at low (1+), intermediate (2+), and high (3+ or over-expressor) levels.

Greenwich LifeSciences is a clinical-stage biopharmaceutical company focused on the development of GP2, an immunotherapy to prevent breast cancer recurrences in patients who have previously undergone surgery. GP2 is a 9 amino acid transmembrane peptide of the HER2/neu protein. In a randomized, single-blinded, placebo-controlled, multi-center (16 sites led by MD Anderson Cancer Center) Phase IIb clinical trial, no recurrences were observed in the HER2/neu 3+ adjuvant setting after median 5 years of follow-up, if the patient received the 6 primary intradermal injections over the first 6 months (p = 0.0338). Of the 138 patients that have been treated with GP2 to date over 4 clinical trials, GP2 treatment was well tolerated and no serious adverse events were observed related to GP2 immunotherapy. Greenwich LifeSciences is planning to commence a Phase III clinical trial using a similar treatment regime as the Phase IIb clinical trial. For more information on Greenwich LifeSciences, please visit the Company’s website at www.greenwichlifesciences.com and follow the Company's Twitter at https://twitter.com/GreenwichLS.